Therapeutic recombinant proteins are one of the most important and rapidly growing frontiers of the biopharmaceutical market. Since the first protein therapeutics were approved two decades ago, there is a transition from the development of naturally occurring proteins to the design of molecules engineered for therapeutic function. The production of recombinant proteins has to follow an economic and qualitative rationale. Therefore, production procedures have to be developed to use effective platforms and low production cost. Moreover, for the production of biopharmaceuticals that are considered for administration to human, the safety aspect is also one of the most important factors.
Presently, the recombinant protein industry focuses on a small number of production platforms, including the bacterium Escherichia coli, several species of yeast, and a selection of insect and mammalian cell lines. However, different production platform has different pros and cons. E. coli expression system might be a preferable system because of low cost and simplicity of cultivating bacteria. On the other hand, this system lacks of post-translational modifications, which is important for most of recombinant proteins. Yeast is another system used to fulfill the drawback of E. coli because yeast contains glycosylation process. However, the glycosylation pattern in yeast is incompatible with human glycan. Even the mammalian cell can effectively produce the recombinant protein, but the production cost is very high.
Plant biotechnology may be applied to overcome these limitations, since plant-based platform is more flexible, low-cost production of high quality recombinant proteins. Plants successfully yield majority of post-translational modifications required for the activity of complex eukaryotic proteins and provide tremendous flexibility in terms of scale, cost, safety, and regulatory issues. Plant production systems have biosafety advantages over microbial and mammalian production platforms because they neither do produce endotoxins nor do they support the growth of pathogens that infect animals, thus reducing purification costs and minimizing the likelihood of facility shutdowns, decontamination issues, and supply limitations that lead to unmet patient/customer demands. Although the costs of downstream processing and purification are comparable in microbial, mammalian, and plant-based platforms, the lower up-front investment required for commercial production in plants and the potential economy of scale provided by cultivation over large areas are key advantages.
This combination of low capital investment, low-cost of goods, and highly scalable manufacturing means that many proteins unsuitable for production in fermenters can be produced commercially using plants. Other proteins can be produced more efficiently by fermentation in plant cells because the post-translational modifications can be engineered to improve product quality and activity. Not all pharmaceuticals will benefit from plant-based systems but the best production platform should be determined empirically for each protein using a case-by-case approach. Production of recombinant protein in plants is novel in Thailand. From all of these advantages, it is possible that the plant platform for production of recombinant protein will beneficial for our country. 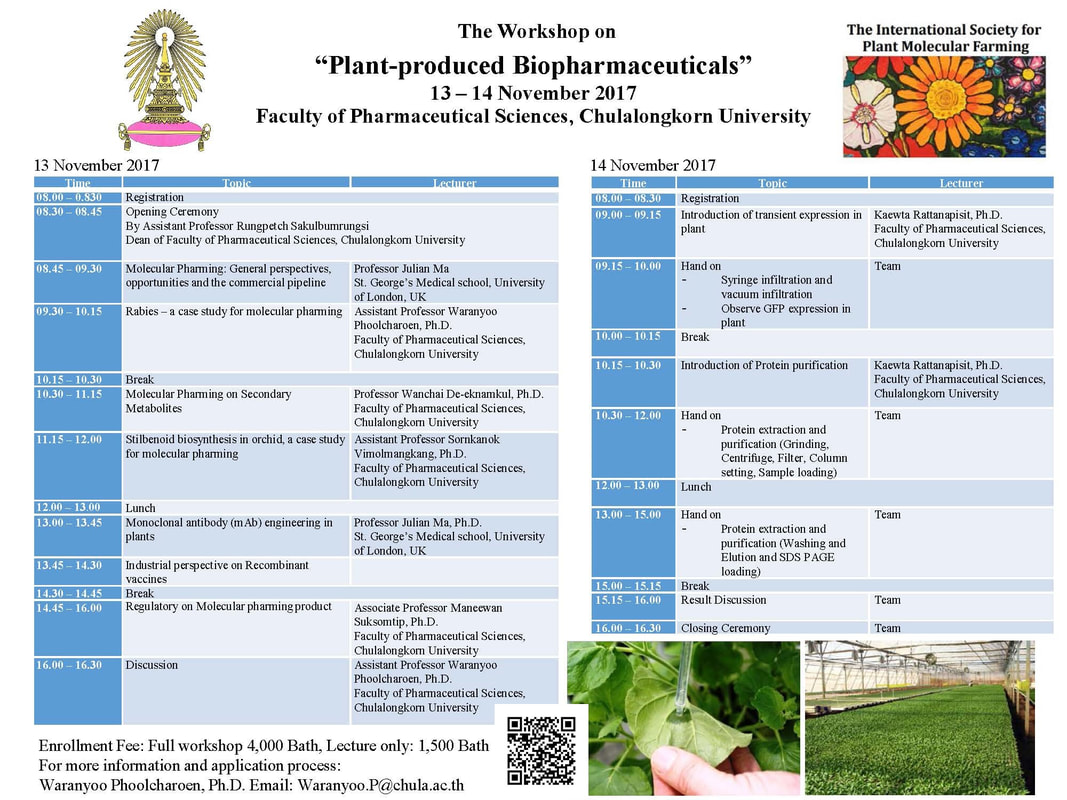